What Are NFTs, and Why Are They Saving Art?

6 minut(es) read
The emergence of NFT tokens isn’t something new that has never been seen before in history. Even the idea of tokenization, on which the phenomenon is based, came much earlier than the world’s first computer. How is this possible?

History: What Are NFTs and How Are They Involved in Art?

In general, ideas like tokenization and uniqueness, on which NFT-tokens are based, appeared long ago, even before Ada Lovelace developed the first prototype of a computer program. So, get ready and take a ride in our time machine.

How Did Rowland Hill Come Up with the First NFT?

In 19th-century Great Britain, the postal system had been stagnant for some 200 years. The rules for sending letters were simple – for the nobility, it was free, the rest paid for the distance of delivery upon receipt.

There was no standard formula for calculating the cost either: the couriers gave a random, believable number, and the recipient had to deal with unpredictable fees. Of course, the nobility endured 200 years’ worth of attacks from friends asking for “well, send it for free, please,” causing the postal system to lose money.

Back then, Sarah Lee worked as a postal clerk. She had to return a letter if the courier overcharged for delivery and had to listen to her boss berate the nobles and their friends for sending letters for free. In the evening, tiredly, Sarah tells her son, Rowland Heale, all about it.

On January 6, 1837, the son, Rowland, decides that the postal system has had enough and suggests a most straightforward idea: let’s mold-proof of payment on the envelopes. Of course, Rowland had to work hard to convince the public of the concept’s value.

For three years, Rowland campaigned for stamps like no other man in history: he had to convince the state apparatus of how important introducing stamps for all letters was. The idea shot out with such force that the law of free mail delivery for the nobility was repealed. This was not the end.

A critical moment for our history occurred on May 6, 1840, when the law firm of Oliverson, Denby & Levy picked up the idea of printed stamps and sent an envelope to Scotland that had ten black stamps with a picture of Queen Victoria and the inscription One Penny. They were called the Black Penny. It was the first-ever sent prepaid letter. 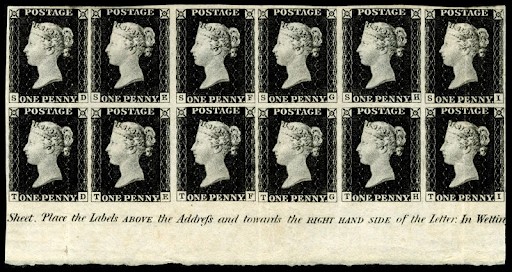 People looked at the stamps, studied the papers under a magnifying glass, realized that they were different from each other, and rushed to collect them. They would paste the stamps on walls. It was not until the mid-1850s that people systematically collected them. So in 1855, the first stamp collector Mansen sold his collection to Edard de Laplante. It’s considered that it contained all the postage stamps used in all the world. Philately, or, collecting, came into being.

However, not all stamps were valuable. Mainly special ones were sought out: they should come with an interesting mark, an extraordinary story, a special drawing or author. Uniqueness was valued. Thus, an envelope from the first-ever prepaid letter was sold for 690 thousand francs at an auction in Zurich in 1992.

Coming Back to 2021: What Do NFT and Stamps Have in Common?

Rowland Hill was the first person in history to tokenize proof of payment and gave rise to the phenomenon of stamp collecting. But, many interesting things happened in 180 years: people collected books, paintings and pokémon chips, and then blockchain appeared.

Along with blockchain came NFT tokens, which have the properties of the same stamps: 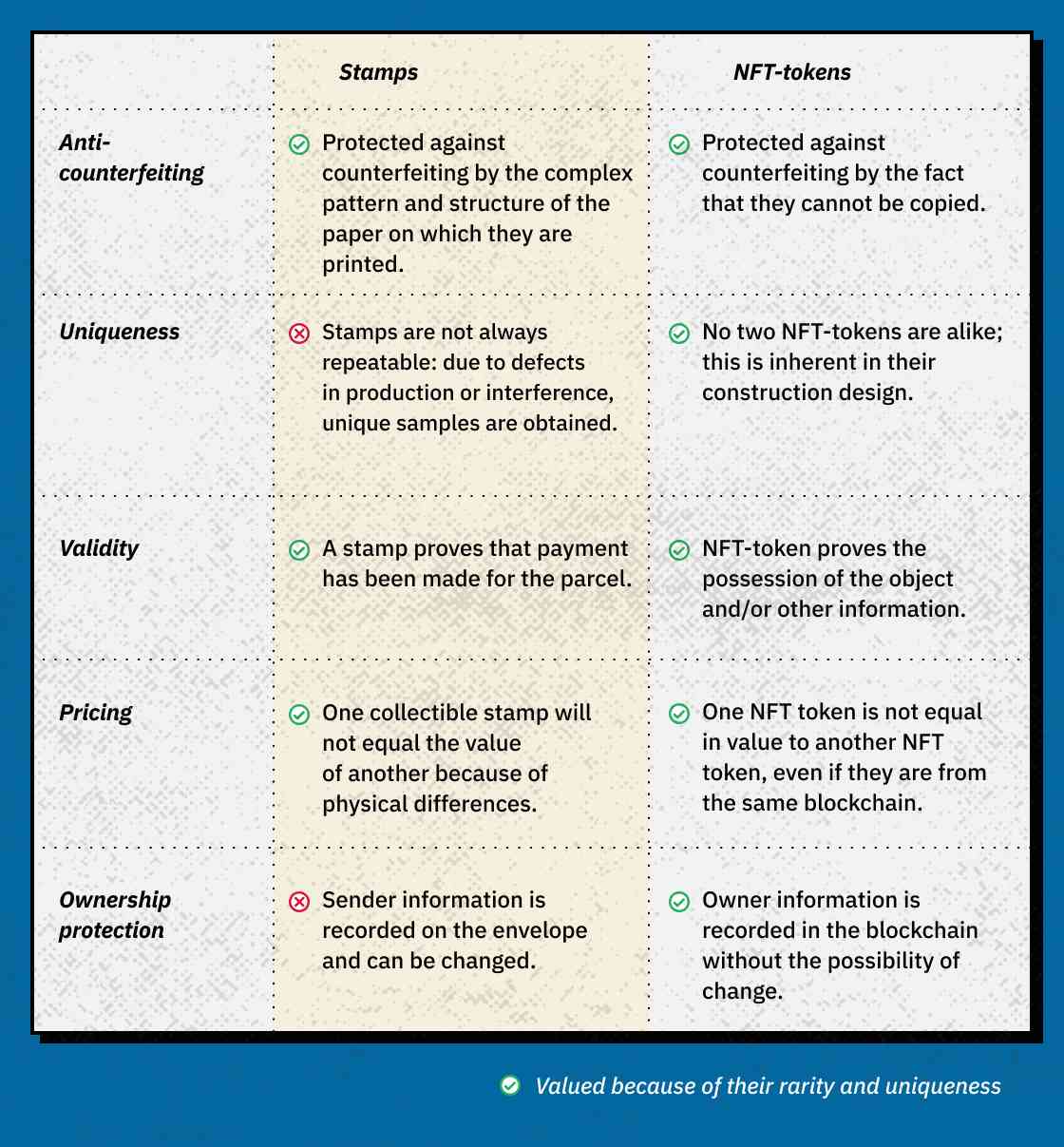 What Are NFT, and How Do They Work?

The name itself, NFT, is short for “non-fungible token” or “irreplaceable coin.” Tokens are used for trading pieces of art via blockchain.

One of the first examples of selling art using the NFT concept was CryptoKitties. The browser-based game allows people to become cat breeders on blockchain with all the trappings: care, breeding and selling the most exotic pets. Unlike the classic breeders market, digital cats do not suffer and are sold at prices ranging from 0.5 ETH to 20 and above.

The rarer the kitty, the more expensive it is. The price is set by the breeder when putting the cat up for sale.

What Is the Purpose of NFT?

NFT-tokens solve this problem by having the owner’s wallet number recorded in a smart contract without revealing identity, and then ownership of the data is secured on the blockchain.

What Has Been Sold as an NFT? 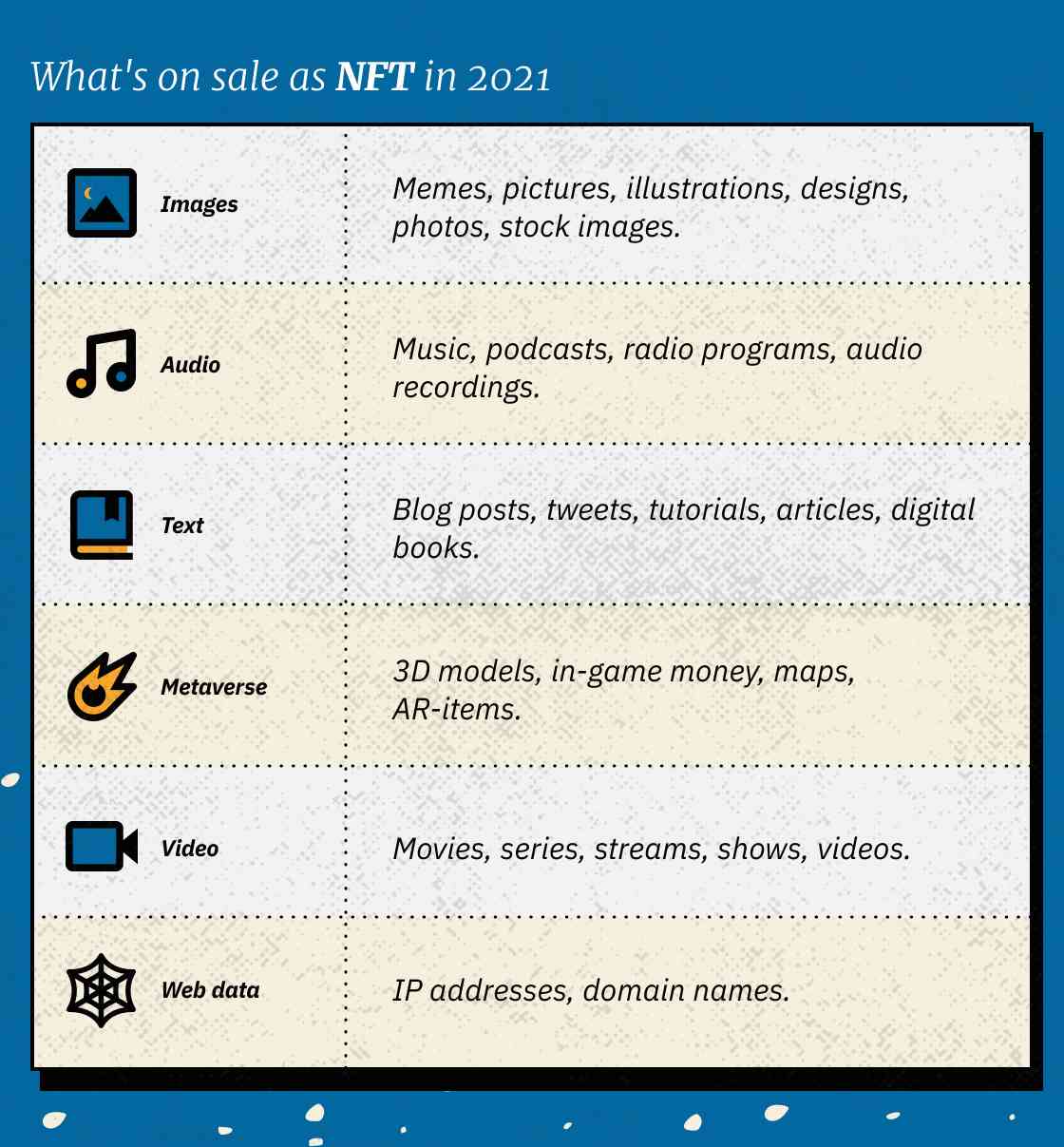 What Can You Sell as an NFT?

Decidedly anything that can be digitized and put on the Internet. NFT is about trading data that is stored on digital media. Conventionally, this data is the digital version of documents—for example, the ownership of a house or a PS5 receipt.

Up until 2021, the NFT ecosystem’s main trading commodity has been digital art, game equipment and characters.

How to Make Money with an NFT?

What Features Should an Item Sold Through NFT Have?

How Are NFT Implemented?

For NFT tokens to circulate freely across different blockchains, some are working towards standardizing their issuance. There were four NFT implementation standards in 2021. Each of them runs on the Ethereum blockchain, so the name of the standards starts with ERC.

Using standardization, there are platforms in 2021 that allow you to create your own NFT token without programming skills.

Where Can You Create and Sell an NFT?

Here are the platforms that post digital art with NFT token generation.

Here are galleries to place your digital art:

There are also sites for launching your own NFT marketplace, for example, Pixura – Create your own Crypto-Collectible NFTs. This project contains templates to start any project to trade NFT assets under the ERC-721 standard in a minute.

Why Are NFTs Saving Classic Art?

NFTs give a new energy boost to the development of fine art. The emergence of installations like “Right Place & Right Time” shows the high potential of this technology.

Undeniably, there are many creative individuals in the field of crypto-enthusiasts, and this is one way for them to express themselves. Thanks to decentralization, the sale of art takes place without intermediaries; it encourages creators to develop.